Philippe Bertho is classically trained having enrolled in art school in Reims, France in the early 1990s. There, he spent considerable time studying decorative trompe l’oeil painting. Tromp l’oeil (“to fool the eye”) is a technique used by artists to create the illusion of a 3rd dimension on a flat surface. It is obvious from Bertho’s artwork that he fools much more than the eye…he draws one in by the heart and also quite frequently by the funny bone.

Despite his ability to perfectly render reproductions of master works, Bertho was drawn to the world of fantasy and illusion. As his style developed, he drew inspiration from renowned contemporary trompe-l’oeil artist, Jacques Poirier. In his early work, Bertho exhibited ingenuity by including unusual materials in his paintings. Employing objects that other’s found useless – corrugated iron, rusted metal boxes, old light bulbs – he was fascinated with his ability to bring his art alive by creating dimension – either by the addition of these items directly onto his canvas or later through the technique of trompe l’oeil.

In 1995, Bertho’s artwork garnered accolades at the Regards sur les Arts salon show – a new talent showcase in Lamballe, France. He was well on his way to developing his unique approach to trompe l’oeil painting. The style that he developed cast a new look on everyday objects, transporting the viewer into an imaginative and rich world. It has been said that Bertho’s paintings create a world where the whimsical meets the witty, a juncture between the fanciful and the eccentric. And into his paintings, Bertho inserts mischievous characters – climbing, searching, running, thinking – each painting evolving into a “hyper-realist” world, little scenarios of his own ingenious invention. Using a combination of narrative figuration and Pop inspiration, the result has become the basis for his simple, thought-provoking artworks. 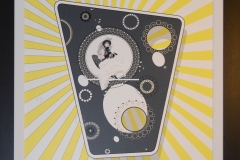